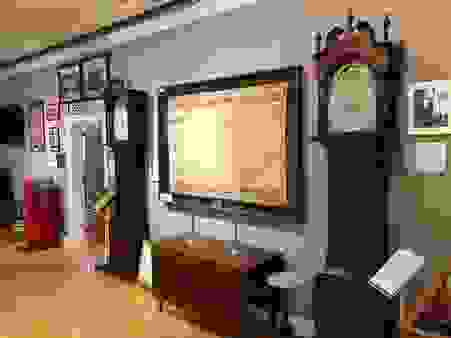 Because of improving conditions with the coronavirus pandemic, the New
Holland Area Historical Society Museum is pleased to announce that it
will be reopening starting in March. The Museum will be open on
Thursdays from 10:00 a.m. to 2:00 p.m.   If conditions change with the pandemic, the Museum will announce opening changes on this website.
Masks will be required as will social distancing of six feet minimum between people.

We are continuing to schedule private tours at this time. Face masks are required along with maintaining proper physical distancing during your tour. The museum will be cleaned after each tour. If you are interested in a tour please call Don Horning @ 717.538.3079 or Wilbur Horning @ 717.575.3148.

The New Holland Area Historical Society Museum has been a part of the borough since 2005. The building that houses it dates back to the 1780’s. There was a general store in the building continuously from the 1700's until 2005 and a hardware store since the early years. The western portion of the building was a tavern and hotel until 1856, followed by a drug store from 1856 to 1913. Most people knew it as the Kauffman’s Hardware Building until it took its current form.

The Museum provides space to store and display artifacts, historical data, photos, literature and other memorabilia from the rich history of the New Holland area. The collection contains extensive materials from The New Holland Machine Company and Victor F. Weaver, Inc, as well as paintings by local artist Myrtle Trembly and many other local historically significant items.

The Historical Society has recently been presented with an opportunity to purchase the Kauffman building. While it is exciting to be able to lay a solid foundation for the future of the Museum and the work it does, there are considerable responsibilities that come with the ownership. The first is paying the mortgage and the second is the maintenance of a building well over 200 years old. Therefore, we have announced The Preserving New Holland Capital Campaign to generate enough funds to purchase the building, pay off the mortgage and do some much needed repairs to the external brickwork. Our goal is to raise $250,000 and due to 100% support from our Trustees and the generosity of other donors, we have achieved over 75% of our goal! That has given us almost enough to complete the mortgage but now we have some extensive brickwork that must be done in the near future. So...

We need your help!

If you would like to see the important work done by The Historical Society continue, please send your donations to the Preserving New Holland Capital Campaign, payable to “NHAHS,”  to:

(The New Holland Area Historical Society is currently registered as a 501(c)(3) charitable organization in Pennsylvania. Donations are tax deductible.)

The Preserving New Holland Capital Campaign will ultimately allow the Historical Society to focus more time and energy on providing a significant resource for the New Holland area as well as achieving the preservation of a valued historical landmark. Your donation can help us reach that goal.

Thank you for all of your support of the New Holland Area Historical Society!

Due to the pandemic we do not have any presentations scheduled at Garden Spot Village Chapel at this time. As conditions improve we hope to be able to resume these gatherings. Continue to check the website for the status of these events.

See an article entitled "Pieces from the Past" describing artifacts at the NHAHS Museum that appears in the Shopping News of Lancaster County Facebook page. Click the button below to see the article!

An article describing the museum's 125th Anniversary of New Holland Borough exhibit appears on the Shopping News of Lancaster County Facebook page. Click the button below to view the article!

Online Copies of the Clarion Available

The Power Library site shown to the left houses digital copies of the town newspaper published from 1873 through 1950.

The papers are stored in 3 different collections based on their publication date.

The collections are shown to the left.

This link takes you to the Clarion Collection list shown to the left  Individual collections are listed alphabetically, so scroll down through the list till you come to the section entitled "LancasterHistory - New Holland Clarion Newspaper"

The Power Library website is not owned by or affiliated with the New Holland Area Historical Society. We do not provide any support or assistance to those wanting to utilize this resource.

Support assistance is available through the "? Help" menu found in the extreme right-hand side of the menu bar.

This resource is a real treasure trove of historical information for the New Holland area, and we hope that you enjoy your time doing some research into our history!

Visit our Current Exhibits page for a preview of the exhibits actively displayed in the museum. The most addition is an exhibit dedicated to the 125th Anniversary of the Borough of New Holland.

This book chronicles the life of Victor Weaver from the humble beginning of a Market Stand to processed poultry brands known through the Northeast. More than just a success story, the author writes about the profound impact Mr. Weaver had on employees, the town and many other organizations.

Read the story of a humble Mennonite man who invented the automatic tying baler, putting New Holland on the map.

Looking for a little help from our friends

The museum is blessed with thousands of New Holland area photos that were donated by countless supporters of our efforts to preserve our history . Many of them include some type of identification information, and others were identified my NHAHS members based on local knowledge or other photographic evidence.

But there are hundreds of interesting - and potentially historically significant - photos that we are not able to identify. The purpose of this initiative is to solicit your help in identifying these photos.

The plan is to place small batches of these pictures on the website in the Photos section, including whatever info we have for each, and providing you with a contact form where you can tell us how you can help identify these treasures. Each photo is assigned a number, and all you need to do is tell us that "photo #7 is a picture of my great grandmother Elvira's birthplace, located just east of N Railroad avenue."  That's it. If you'd like to include your name that would be great.

It's a chance for you to participate in the work of the NHAHS, and we greatly appreciate your assistance.

Better yet, see us in person!

We love to share our museum with you, so feel free to visit during normal business hours!

other hours by appointment only

Sign up to hear from us about upcoming events and exhibits